Obstructed View Seats: Advice For Your Next Billy Joel Concert

Last Thursday night, my husband and I saw Billy Joel in concert at Madison Square Garden in New York. Uncharacteristically, the show featured no “special guests,” unless you count a conspicuous couple in attendance: Bill and Hillary Clinton.

I guess we've watched too many hockey games, because when the pre-show crowd jumped up and focused their cell phone cameras in a single direction, our first thought was that a fight had broken out on the floor.

Given the median age at these shows, that would have been something to see.

Instead, there they were, the former POTUS and his wife, beaming and waving as they made their way to their good-but-not-too-good seats, about eight rows back from the stage. It was pretty heady stuff seeing them up-close and personal(-ish), but except for the times Mark nudged me to check out Hillary’s dance moves, I largely forgot they were in the building once the lights dimmed.

That is, until Billy dedicated “River of Dreams” to them about halfway through his set-list. A cameraman focused in on Bill (inexplicably overdressed in a full suit and tie) and Hillary (who Literally.Never.Stopped.Swaying). Their image was plastered on the Garden jumbotron, and despite right-wing media reports, Mark and I agree the raucous response was probably equal parts cheers and jeers.

It was a great show.

Fast forward to the following morning, when I opened Facebook to discover a backstage photo of Billy and Bill-and-Hillary and a handful of other concert VIPs. A conservative fan vowed never to listen to him again. A liberal called her a snowflake. Then the floodgates opened.

“You f—king dumb c-nt…” “You piece of trash human being…” “Child rapist despicable piece of sh-t.”

2.3k ignorant and hateful comments from fans on both sides of the aisle. Over a freaking photograph.  Things got so vicious and ugly--so quickly--it made my heart knock and my hands shake (the same cowardly "flight" response I've always had around escalating confrontation).  I kept scrolling through the posts in spite of myself.  I kept hoping a reasonable human being would suggest everyone cool it off.  Someone finally did.  He was gutted mercilessly.

Ignorance and hatred.  It made me think how often the two go hand in hand.

And it made me think of my seats on Thursday night.

You see, I’ve been to a few Billy Joel concerts. 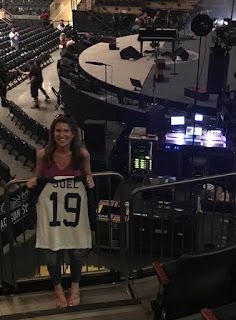 Stalking a celebrity can get expensive, so I usually settle for “obstructed view” seats. Here’s how Ticketmaster defines them:

You’ll be unable to see the entire stage from these seats. You’ll have either an incomplete view because of the position of the seats, or something will be in your line of sight—like a pole, speakers, or the sound board.

For many fans an obstructed view is not a problem, and the tickets are clearly labeled at the time of purchase.

That’s some deep philosophical shit, people. Buddha himself couldn’t sum up the human experience quite like the good people at Ticketmaster.  Consider:

“You’ll be unable to see the entire stage from these seats.”

A wise man (my other favorite William) once said, “All the world’s a stage.” It’s not a perfect analogy (he considers only the actors and ignores the audience), but let’s extend the metaphor. If all the world’s a stage…where are your seats? Rich or poor, gay or straight, liberal or conservative…wherever you sit, you’ve got a limited world-view.

“--because of the position of the seats.”

But wait a minute, you think. I’m not defined by binary terms! I’m sensitive to the other people’s perspectives. I HAVE A BLACK/WHITE/GAY FRIEND!  I SPENT A SEMESTER ABROAD! I’VE VOTED ACROSS PARTY LINES!

Before you think I’m getting all blame-y about your narrow worldview, recognize it’s not your fault you can’t see the entire stage. It’s the seat’s fault. Where you sit determines what you see. Don’t take it from me. Take it from Ticketmaster.

“…or something will be in your line of sight…”

Ok, so it’s not entirely the seat’s fault. There’s probably something else getting in the way of your broader perspective of that world stage. I don’t profess to understand the depths of Ticketmaster’s wisdom, but I wonder if those “somethings” may be personal blinders. What’s blocking your line of sight? Is it apathy, insecurity or pride?  Stubbornness, prejudice or fear?

“…a pole, speakers or a sound board.”

Ticketmaster knows when to rein it in. Sometimes a pole is just a pole.

“For many fans, an obstructed view is not a problem…”

Ahhh, here’s where we get into real trouble. And by “we,” I mean every jerk who commented under that pic of our former POTUS and the Piano Man. For them, “an obstructed view is not a problem” because they honestly believe they can see everything they need to see quite clearly from where they sit, and that’s about as f--king dangerous a perspective as any human being can have on this planet.

Look, you have your reasons for disliking (hating, even?) [insert political figure here]. You can bet I have my own. I’m not aiming to change anyone's perspective;  if I've learned anything from social media, I've learned that's an exercise in futility.  I’m only stating the utterly banal fact that none of us has the full picture. And yet…and yet…we insist on speaking (so hatefully and so hurtfully) as if we do.

“…tickets are clearly labeled at the time of purchase.”

It’s true, TM stamps it right on your ticket. It’s a reminder that while you’ll be in the building, you won’t have a perfect view.

What a humbling concept.

Here’s my Swiftian proposal: we follow TM’s policy and stamp “limited view” on everyone’s forehead at birth.  Maybe we’d be gentler with one another if we were constantly reminded that everyone, even the folks sitting front-row center, operates from a limited vantage point.

Maybe we’d even be gentler with ourselves.

I don’t expect the universal-forehead-tattoo idea will catch on, but I do encourage folks to consider purchasing obstructed view seats for their next concert. For one thing, they’re often better than the full-price tickets. But more importantly:

Once you accept you’re sitting in an obstructed view seat, the pressure kind of lifts. There’s a certain humility in acknowledging your view is obstructed. You feel genuinely grateful just to be in the building. And when everyone stands up to sing Piano Man with the house lights on, it honestly doesn’t matter if you’re the POTUS or the couple with nosebleed seats in the rafters or the lifelong fan tucked behind a light pole.

You’re all part of the song.

A glorious, out-of-tune, drunken song that gives everyone in the Garden goosebumps when they forget where they’re sitting and become one swaying mass of battered and broken but momentarily happy humanity.

And stay off Facebook the next day. Trust me.