The One About Abortion (revisited)

I was raised Catholic and my teachers (many of them nuns) taught me abortion is a sin against God.  No nuance, no debate.

It never sat comfortably with me that women who were raped must be doubly victimized by carrying a resultant pregnancy to term.

It also didn’t sit comfortably with me that some women purportedly use abortion as a casual form of birth control or family planning.  (I say “purportedly” only because I’ve never personally known anyone who has.)

And 40 years later, that remains my muddy position on abortion.  Whenever the topic comes up among my friends who identify passionately with one side or the other, I begin to search furtively for the nearest exit.

My problem is that I love and respect many women who are staunchly pro-life.  I imagine them bristling at my rape example above, because they believe every conception must be protected.

I also love and respect many women who are staunchly pro-choice.  I imagine them cringing at my use of the word “casual,” because NO woman, they argue, ever makes that gut-wrenching and intensely personal decision casually.  And even if a woman ever did, it was her body and her decision.  Period.

The truth is, I admire any woman who holds a conviction stronger than my own.

When I taught Freshman Composition, my students were required to write 10-page research papers on a “controversial topic”.  Many chose abortion.  In their initial drafts, they submitted what I called “middle ground” thesis statements.  I’d sit down with them and try to explain why a strong thesis statement must adopt a definitive stance and a clear point-of-view.  If you can’t choose a side, I’d tell them, pick something else to write about.

If only they knew what a hypocrite I was. And still am. 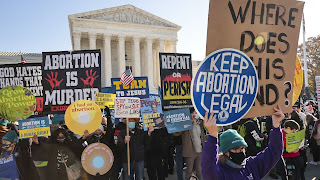 Because despite my spineless position on the topic I’m going to offer a tentative thesis:  What troubles me most about the current debate is an increasing sense that my pro-life and my pro-choice women are screaming at one another from opposite sides of a fence, without realizing they’re all being stealthily enclosed in the same pen.

Remember the dystopian novels we read as schoolchildren, the ones that seemed so farfetched and surreal but now feel eerily prophetic?

It’s not too difficult to imagine a dystopian future in which abortion is mandated by law. Here’s the scenario: climate change leads to decreased food production and availability, which in turn leads to a government-enforced limited-population policy.  We’ll call this Dystopia “A”:  compulsory abortions in observance with a “one child per family” mandate.

It’s far easier to imagine a not-too-distant future when Roe v. Wade is overturned by an increasingly conservative slate of Supreme Court justices.   Dystopia “B”:  no access to legal abortion.

Now given your own stance on the topic, one of those as-yet-fictional scenarios may strike a more chilling chord than the other.  But for a moment, consider the outcome most terrifying for someone who thinks differently than you do.  Imagine, in other words, putting yourself in your opponent’s shoes. It goes against our natural instincts, right?  But that’s the key to writing good research papers, and it turns out it’s kind of the key to being a decent human being.

As part of that composition course I used to teach, I required my students use the Rogerian strategy in their papers.  We studied Carl Rogers, a 20th century American psychologist and one of the ten people I’d want around my dining room table for that “if you could invite any ten people living or dead” dinner party.  Rogers believed the most effective means for reducing conflict and advancing civil discourse is to begin by establishing some bit of common ground with your opponent (not by abandoning your position, mind you, but by “acknowledging the partial validity of your opponent’s position”).  It sounds almost quaint nowadays to imagine two people on opposite sides of an argument acknowledging that neither is entirely wrong.  Or stupid.  Or ignorant.  Or a baby-killer or a bible-thumper.

When it comes to civil discourse, we are woefully out of practice.

But let’s try it, anyway.  Imagine, regardless of your true convictions, that you are unfalteringly pro-life.  (My pro-choice friends whose brains involuntarily autocorrected to “anti-choice,” please work with me for a minute.)

Now, imagine you are pro-life and we are living under the one-child-per-family mandate and you find out you are pregnant.  You already have one child.  The law says you must abort.  How would you feel?

Now let’s shift gears.  We’re all pro-choice, for the sake of this argument.  We’re in “Dystopia B.” Roe V Wade was successfully overturned and you are raped and become pregnant.  The law states you must carry the pregnancy to term.  How would you feel?

Being stripped of your consent and forced to act against your will is terrifying, no matter which side you’re on.  And no matter which way the future tilts, this will be life inside the pen as long as we keep screaming at one another over that fence and drowning out the sound of stakes being hammered into the ground around us.

I’ll probably lose respect from some of you for my middle-ground position on abortion.  I deserve as much.  But I will say this with conviction:  I am staunchly anti-pen.  I don’t want women to become so distracted by our differences in opinion that we allow anyone to strip us of the right to have one.

If you have convictions stronger than my own, keep shouting over the fence.  Your voice deserves to be heard.  I'll just be standing knee-deep in the mud, keeping a watchful eye on the perimeter.