I’d heard about moms who sob all the way home and who drink themselves into Merlot-induced stupors every time they walk by their college freshman’s empty bedroom.

Trust me.  No one is more surprised than this girl that I’m not one of those moms.

Our goodbye was relatively easy.  We left his dorm room for the last time under the premise of locating both the laundry and the mail rooms.  We found the laundry room in the basement, precisely where one would expect a laundry room to be.  We walked out onto the sidewalk, huddled together as “Russell-party-of-four,” and knew without speaking that we weren’t really going to traipse around campus looking for the mail room.  That was just an excuse to get outside.

I hugged my too tall, too thin son and tried to think of a Really Important Thing To Say.  I had nothing.  I’d said it all already.

I told him I loved him and I may have said, “Promise me you’ll eat,” because I always say that.  He hugged me back.  He probably promised, as he always does.  And I turned to go.

In true Kara fashion, I led our Russell-party-of-three the wrong way, in the opposite direction of where we’d parked.  When Mark (or maybe it was Brian) tugged at my arm to correct me, I muttered “just keep walking” under my breath, mostly because I needed the long-dreaded moment to be over, but also because I figured Kevin did, too.

I don’t know if he watched us leave.  If he did, I hope he had a little laugh at our expense.

When we finally circled our way around to the correct parking lot, Brian put his arm around me and told me I’d done a good job.  He didn’t mean “You raised him well and he’s ready for this.”  He meant only that I didn’t make a blubbering idiot of myself in front of the other families on the quad.  Still, I chose to accept the unintended compliment.

The ride home was also easier than I’d anticipated.  Mark drove the lead car in our diminished caravan and Brian and I rode together behind him.  I cried only when we crossed state lines.  Somehow Mark knew this, and my phone rang both times.  “Doing ok?” he asked.  “Yep,” I answered, and I was telling the truth.  Aside from the dull ache in my heart, I was alright.

It’s been almost three weeks since we left him on campus, and while I miss him terribly, I’m still doing alright. I’ve tried to follow the advice everyone has given me.  And I’d give myself decent grades overall:

Don’t ask too many questions, or give too much advice.  (C)

Ok, so there’s room for improvement on my end, but for the most part, it’s been pretty routine stuff.

What wasn’t routine was a text that floored me just a few nights ago, when Kevin asked, out of the blue, if I remembered the final line of The Great Gatsby.

He knows I know it by heart.  I texted the line back to him:

“And so we beat on, boats against the current, borne back ceaselessly into the past.”

He told me he’d been thinking about it a lot lately, in a way he hadn’t when he “fake read” the book in high school.  I guess he’s decided the statute of limitations has expired on all those assignments he half-assed.

Mind you, he’s not reading the book now.  He’s not even taking an English class (we’ll get that straightened out soon enough).  But like the true son of two English majors, he’d been turning a well-written sentence over and over in his head, and contemplating his own emerging sense of a personal past—his life B.D. (Before Drop-off).

I watched the blinking dots on my phone screen, waiting for his interpretation of the line, and I remembered my own freshman year drop off.  I remembered feeling like I’d been abandoned on a foreign planet, even though I was less than half an hour from home.  I remembered the weird smells and the unfamiliar faces.  I remembered how all the stuff I’d unpacked looked sterile and shiny and not-mine, like the new shoes I wore to school every September in elementary school.

I remembered feeling not much older than that.

I won’t betray Kevin’s confidence by quoting him directly (if you’re reading this it’s only because he has granted permission to share), but the gist of his sudden obsession with Gatsby had to do with a nagging sense that his life B.D. was rapidly receding.  Everything would be different the next time he came home.  Naturally, the idea made him a bit sad.  It made me a bit sad, too.
So the English teacher in this mom kicked in, and we revisited Fitzgerald’s line together.

Yes, I conceded, the past slips away.  Gatsby can’t return to 1917 any more than a college freshman can return to his senior year.  But Fitzgerald’s “past” is a paradox, I told him:  both irretrievable and inescapable.  (This should serve as a warning to anyone who texts an English teacher, especially at the end of the day.  Expect unreasonably long replies.)

“Gatsby believed in the green light, the orgastic future that year by year recedes before us.  It eluded us then, but that’s no matter—tomorrow we will run faster, stretch out our arms farther….And one fine morning—So we beat on, boats against the current, borne back ceaselessly into the past.”

The image is of someone reaching for their future, stretching their arms out toward a distant goal.  But even as they chase it, an invisible current pulls them back—always back—toward the past.

To Fitzgerald’s protagonists, that past is an obstacle:  a relentless undertow preventing them from paddling out toward fresh and open water.  But when your college freshman has left home and everything feels like it’s changing too quickly (for both of you), there is some solace in its stubborn inescapability.

Alone as he is in upstate Vermont right now, surrounded by people who aren’t-yet-his-people and places still strange and unfamiliar, life B.D. feels to him increasingly distant.  But I know it remains a part of who he is, always.  It’s the invisible weight he carries: sometimes a trophy, sometimes an albatross.

Maybe that’s why it wasn’t all that hard for me to leave him.  He’ll change while he’s away, and I am more than OK with that.  What decent mother wouldn’t be?  But there’s a part of him that remains tethered to us.  Not in the creepy “I’ll-still-rock-you-like-a-baby-even-when-you’re-a-teenager” way (seriously, let’s agree to STOP buying Love You Forever until it fades forever out of print), but lightly tethered, just the same.

It’s not at all what The Great Gatsby is about.  It’s a terribly botched application of the text.  The point is, Fitzgerald threw us a line that connected us in these uncharted waters of our lives A.D., and for that I am grateful. 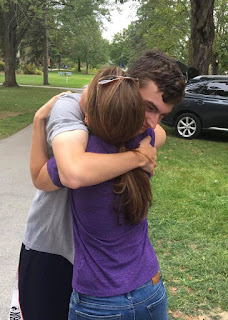