I have a friend who is an amateur aerialist.  I have no idea where her fascination with circus arts originated, but every so often she’ll share a photo of herself swinging on a trapeze.  I’m not talking about the kind you see at amusement parks.  I’m talking a legitimate freaking trapeze.

I admire the hell out of her, because I’d never do it.

I don’t have a fear of heights, or even of falling.  But I’m pretty sure any non-lethal turn on the trapeze involves a rudimentary understanding of catch and release points, and I have zero concept of either.

I’ve never caught an object with my eyes open.  When someone tosses me a football, I clamp my eyes shut, stretch out my arms in the general direction of the last place I located the object in space, and clench every muscle in my body in anticipation of impact.  I’m sharing a pic to prove what I’m talking about.  It’s quite possibly the least flattering photo of me ever taken, but it gets the point across in a way that mere words cannot. 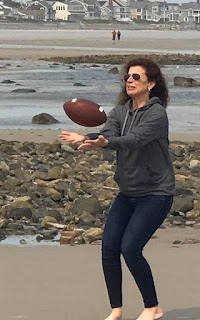 Go ahead.  Try un-seeing that.  Oh, and here's another, in case you think the first was a fluke: 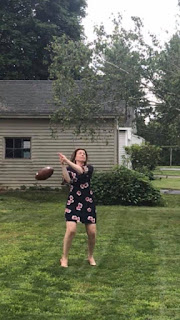 I’m no better at release points.  Most of the balls I throw end up short of their intended target, apparently because I hold onto them too long.  I once joked the chances of an object returning to me when I toss it up the stairs is 100%.  And it’s true.  There are scuff marks in the ceiling above our staircase from toiletries aimed at the landing.  I’ve toppled lamps, drilled my husband in delicate areas, and injured innocent bystanders.

Sometimes I overcompensate and let an object go too soon.  This is the only plausible explanation for the time I rolled a bowling ball behind me.

Letting go too soon or holding on too long:  either way, I miss a lot of targets.

And that’s what I’m thinking about on this final day of this final year of the decade.

This was a year of “letting go” in many ways, and given my aforementioned struggles, it was a challenging one for me.  The first and biggest example was releasing my son into the wild.  Winooski, Vermont, to be exact.  The timing felt too soon, and all wrong.  It’s a big effing deal to send your kid off to college.  It changes you and it changes them and changes your entire relationship…but for the better, maybe.  I don’t know.  We’re still figuring it out.  But I do know I love and appreciate him more now than ever before and I didn’t think that was possible.

I also let go of a job that wasn’t making me happy anymore.  I felt undervalued and (paradoxically) unworthy.  I suspect it was a weird midlife crisis of some kind, but I walked away from teaching for the first time in 24 years.  I walked away from a job I have always loved.  I’m in the middle of a good, deep, year-long “breath,” and I’m beginning to think I’ll be ready to return when I exhale.

And finally, I let go of my board position at Family Promise of Central Connecticut, a nonprofit I care so deeply about.  It’s a strange feeling knowing I won’t gather around a table next month with folks I’ve gathered around a table with every single month for the last six years, but something told me it was time.  I think the “something” was the unshakable sense a successful nonprofit board requires people who understand spreadsheets.

I have always, always fake-read the spreadsheets.

For all the “letting go” I’ve done this year, I’m also keenly aware of a few things I’m still holding tight to…things I should have released a long time ago.  Things like doubt and fear and insecurity (so many boatloads of insecurity I am actually captain of my own fleet).  Things like not writing that book because I’m afraid my Real Author Friends will hold me in contempt.  (They would not.  Deep down I know that.)

I also know that as long as I hold onto these fears and insecurities I’m going to be stuck here, swinging above the safety net below me, and these 50-year old arms are getting awfully tired.

So on this last day of the last year of the decade I’m going to focus on letting go.  I’m going to try opening my eyes and unclenching my jaw and reaching for the next thing in front of me.

I can’t promise my catch will be a clean one, but at least I’ll look better in pictures.