My little sister cried when Ted Knight died.  He was the white-haired, bumbling news anchor on The Mary Tyler Moore Show, and I didn’t realize (until word of his passing reached my grandparents’ mobile home, where we were spending the last few days of summer) how much she loved him.  She confessed it through sobs.

It struck me as odd then, because she didn’t know Ted Knight.  And as much as I wanted to feel a little of what she was feeling (sisters do that for each other), my 17-year-old self couldn’t muster anything more than mild confusion, which I masked with a weakly sympathetic pat on the back.

I don’t remember how long she “grieved,” but I can assure you she was fully recovered by day one of her senior year.  Her world moved along...Ted Knight-less. 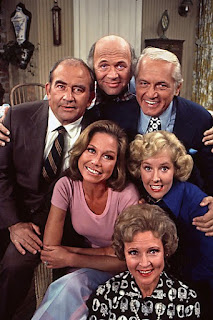 I have a 17-year-old of my own now, and Wednesday morning he texted me from his chemistry class:

NAH IM NOT HAVING IT TODAY

I know Brian’s penchant for drama, so those midday all-caps messages don’t faze me anymore.  I glanced nonchalantly at my phone screen, waiting for whatever garden variety teenage angst would follow.  And what followed was this:  Brian’s chemistry teacher had returned to school that morning after an extended absence.  While he was initially happy to see her, the reunion went south when discussion turned to Kobe Bryant, who was killed three days prior in a helicopter crash along with his daughter and seven other souls in Calabasas, California.

It's safe to assume that unlike countless others grieving the loss of Kobe Bryant, and unlike millions who will likely remember where they were and what they were doing when he died, I alone thought immediately of Ted Knight.

My son never met Kobe Bryant.  He's not even a Lakers fan.  But both of my boys live and breathe NBA basketball, and both of them cried when Kobe died.

Would they have cried for those seven strangers if Kobe hadn’t been on board?  Of course not.

Because they didn't know those people, I’d argue.  And Brian’s teacher would probably argue back: That’s precisely the point.  They didn’t know Kobe, either.

Except that they DID.

No, Kobe wasn’t family.  And it should go without saying that the loss of a celebrity figure in no way compares to the loss of a friend or family member.  But to suggest Kobe’s death was “not that big of a deal because he didn’t affect us personally” is wrong.  And like all good English teachers, I’m going to use prove my point using a poetry term.  Enjambment, in this case.

Much like a teenage boy’s texts, enjambment is signified by a lack of punctuation.  It’s defined as “a poetic device in which a line of poetry extends, without punctuation, beyond the limitations of the natural line break.”

That definition is horrible, as are most literary definitions.  It’s easier to understand with examples.

It’s not great poetry, but you get the point.  Every line ends with a mark of punctuation:  a “natural break” between one line and the next.

And here’s a poem with enjambment:

April is the cruelest month, breeding
Lilacs out of the dead land, mixing
Memory and desire, stirring
Dull roots with spring rain.

It wouldn’t make sense to read T. S. Eliot’s The Waste Land one line at a time.  It must be read in one continuous breath, each line of verse extending beyond the limitations of the natural break.  That's the magic of enjambment:  the last word of one line is connected to the first line of the next in a way that creates meaning, despite the fact the words will never touch.

No, my little sister never met Ted Knight.  But that bumbling white-haired news reporter on MTM must have meant something to her.  It doesn’t matter what that something was;  her sobs testified that across time and space and television airwaves, she felt a meaningful connection.  And when he died, she felt the loss.

Just as my sons felt when Kobe died.

Just as millions of people felt.

Because despite his flaws (and given his admitted marital infidelity and alleged sexual assault, I’m asking a LOT from that single word), Kobe Bryant inspired.  He thrilled and awed.  He brought irrational confidence and unrelenting hope and immeasurable joy to kids who wanted to be like the Black Mamba.  He extended his reach beyond the natural break, across time and space (and wealth and race) to create meaningful connections with people he would never touch.

Fortunately for all of us, we do not live out our lives full stop.  Our inspiration and our pain, our joy and our grief are not limited to the natural breaks of physical contact and geographical proximity.  We do not have to touch one another to be touched by one another.  The universal poem of which we are all part would make no sense that way.

Any kind of meaningful human connection, especially in a world that feels increasingly splintered and hell-bent on barriers and full-stops, should probably not be called into question by even the most well-meaning of chemistry teachers.  Yes, my son took time to grieve for a man he never met.