For My Husband: A Lo-Carb Valentine

Shakespeare’s Cleopatra used the phrase “my salad days” to describe our youth:  that green time of life when we’re too inexperienced to know what we’re doing, and too foolish to care.

I married Mark in my salad days. 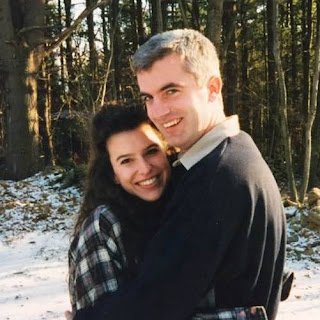 Despite not knowing what the hell I was doing, I chose well. I know this for a fact because I recently entered the meatball salad years.

It wasn’t Shakespeare but my oldest son, Kevin, who coined this newer phrase.  We were on our way to my parents’ house last summer, and I assumed both he and his brother were zoned out on their phones, having not heard a peep from either of them for some time.

I was deep in conversation with Mark about the dinner I’d ordered the night before:  a beautiful salad with mixed spring greens, toasted walnuts and fresh goat cheese.  Atop the salad, three meatballs in marinara sauce.  It was fantastic.

“You wouldn’t think to put meatballs on a salad,” I told him.  “I would never think of it, anyway.  But it’s on menus everywhere now.  I guess it’s part of the lo-carb craze.  And the funny thing is, you don’t even need dressing.”

Mark was quiet for several seconds.  “Didn’t you have a meatball salad that summer we were in Tennessee?”

“I did!” I said, amazed and touched that he remembered.  “They didn’t prepare it that way, but I was trying to eat lo-carb on that trip, so I just skipped the pasta and put the meatballs right on the salad.”

A few minutes passed, during which I began to doubt myself.

“I’m pretty sure that was the first time I’d ever mixed red sauce with salad, though,” I said, with renewed confidence.  “It was good, but definitely not as good as those meatballs last night.”

I paused for a minute, remembering the meatballs.  And mid-memory, a voice came from the back seat.

“Hey mom and dad,” he said, an obvious smile in his voice. “Tell us more about the meatball salad.”

And that was the precise moment we together realized what Kevin and the rest of the world had known for some time:  we were old.